A calendar reflective both of earth and human history

Given that the circulation of the Earth Epic Calendar is still relatively low, I wanted to make the biggest changes to the calendar design and setup since I first started posting about this calendar in 11718 EE (2018 CE).

The biggest change that you will notice is that the solstices and equinoxes mark not the beginning of the quarters but the middle of the quarters.  This makes the indicators of South, East, North, and West more accurate. 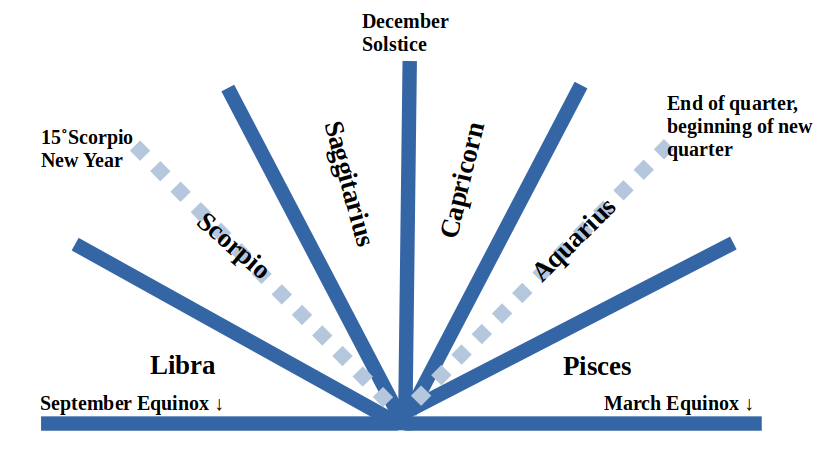 This means that the Sun’s light will be (with a few exceptions) focused on the southernmost part of the Earth.  This quarter wil have the shortest days pf the year in the Northern Hemisphere and the longest days in the Southern Hemisphere.  Therefore, this quarter can truly be called Southlight.

But what is 15° Scorpio?  If you divide the year and the planetary plane into the twelve Zodiac signs, 0° Capricorn is when the Southern Solstice occurs.  0° Libra is when the September Equinox occurs. Each sign occupies 30° of the Zodiac, and the signs between the September Equinox and December Solstice are Libra, Scorpio and Saggitarius.   So 15° Scorpio means 15° into the sign of Scorpio, which is halfway through Scorpio.

The names of the quarters have slightly changed, too.  Southlight and Northlight retain their names because they reference the times of the year that the Sun is the furthest south and north. But I’ve changed the quarters associated with the equinoxes to Eastcrossing and Westcrossing, because those are the times when the Sun, relative to the Earth, crosses the Equator.

Calendar for 11722 available in August

Starting August, I will be making available the calendar for 11722 EE.  It will feature the last quarter of 11721 and the four quarters for the new year which this year starts November 7, 2021 CE.  You will be able to buy calendar downloads from here as well as printed paper calendars, and I am considering making an Etsy store available as well.  You will also be able to have free calendars downloadable to your Google or apple calendars, as well as any other calendar that uses .ics pages.

Keep checking this space for updates.

This site uses Akismet to reduce spam. Learn how your comment data is processed.